In this tale of world travel and abandonment, Joanna Scott tells the story of a seemingly charmed marriage in the Gilded Age.  For years, the pioneering tour guide Armand de Potter and his wife, Aimée, have enjoyed a glittering lifestyle in which they move easily from their villa in the South of France to the capitals of Europe, the Levant, and beyond.  But in 1905, Armand disappears at sea off the coast of Greece.

Mysteriously, Armand's body is not found, triggering a desparate search by his wife, who slowly begins to suspect that the man she loved may not have been who he claimed.  In bills and letters, she finds someone she never knew, swirling in secrets and alternative histories.

In De Potter's Grand Tour, Scott moves deftly from the past to the present, from dialogue to journal entries, and from exotic ports to the quaint river town of Tivoli in upstate New York.  Her latest novel is a story of love and doubt, a grand tour of the human heart. 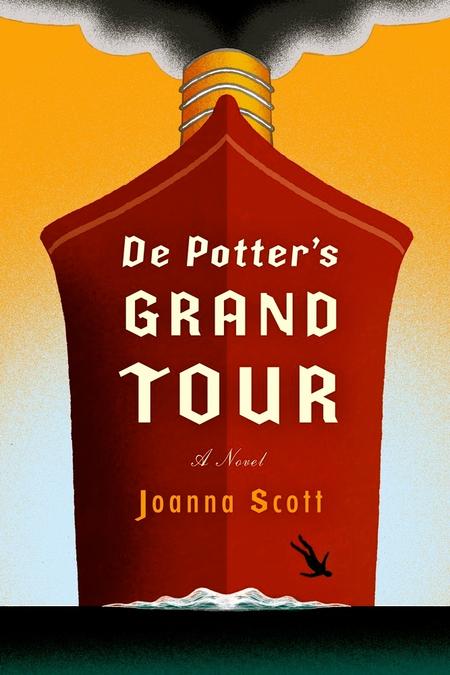 "Joanna Scott's writing is always a wonder, but De Potter's Grand Tour,​ with its hints of Hawthorne's 'Wakefield,' is her best yet: a wizardly dialogue between fact and fiction, the known and the unknown.  I'll be haunted by her elusive, touching, and deluded hero for a long time."
—Andrea Barrett, author of Ship Fever

​"Scott has crafted an understated, atmospheric historical novel as well as an artful mystery set in an era of steamer ships and steam trains, when tourism was new and world travel was a glamorous and sometimes-perilous adventure."
—Kirkus Review (Starred Review)

"Only one of our most knowing prose stylists at the height of her powers could have invented the utterly beguiling experience that is De Potter's Grand Tour.  Joanna Scott has given us a daringly original and serious novel that in its magical rendering of the interior voices of a Gilded Age European adventurer and his American wife is as credible and moving as it is historically astute.  One of the most delightful books I've read in years."
—Jaimy Gordon, author of Lord of Misrule

"Joanna Scott is a writer to treasure, and her beguiling new novel is an intrepid exploration of the world, the past, and the human heart."
—Peter Ho Davies, author of The Welsh Girl

"What a whirl of a book, full of secrets and surprises.  Joanna Scott is among the handful of American writers I will always want to read, and in De Potter's Grand Tour she offers a capacious circumnavigation of a world tinged by melancholy, love, mystery, shimmering beauty, and unlikely passion.  A lovely and strangely affecting read."
—Jay Parini, author of The Last Station: A Novel of Tolstoy's Final Year

"Joanna Scott is the great tour guide of contemporary American fiction, navigating us across oceans of memory and longing.  In the company of Aimée de Potter as she intrepidly searches for her husband's ghost and secrets, Scott charts here one of her grandest tours yet, one more utterly singular story only she could have written."
—Steve Erickson, author of These Dreams of You​